Reflecting on My Trip To Robot Academy

What I learnt from my Trip to Carnegie Mellow Robotics Institute 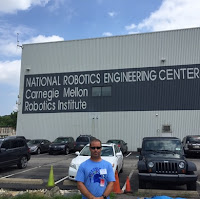 The National Robotics Institute of Engineering and robotics centre is a Branch of Carnegie Mellon University and is located in Pittsburgh.  It is a world leader in robotics education, research and product development.  Since its inception in 1979 it has been ranked in the top 5 in the world for robotics research and product development.  They build robotics products for NASA,  like the Mars Rover,and the US military, like the Dragon Runner, which is an autonomous military robot that can be thrown into a building to provide surveillance.   the As a self-proclaimed geek who religiously reads magazines like Wired, Engadget and Popular Science it has been my dream to visit this mecca of all things “cool” for a long time now.  And my trip did not disappoint…..but not for the reasons I had first hoped for.


When we sign up for Professional development sessions whether it is a 1 hour talk or a week long workshop like mine, we often have preconceived hopes and expectations of what we want to learn.  However, within the first few hours and days of my journey to Pittsburgh it became clear that mine trip to Carnegie Mellon was not really about robots.

When I arrived at the Calgary Airport at 6am Sunday Morning a huge storm had engulfed Calgary and surround area causing the airport to be shut down.  Sadly, flights were delayed and even cancelled, including my flight to Pittsburgh.  My first German instinct was to line up like hundreds of other stranded passengers and demand to be put on the next flight out.  However, after a soothing latte I thought better and headed back home leaving the chaos behind to collect my thoughts and figure out what would be my next move.  When I got home, much to the surprise of my family, I had received an email from Air Canada saying they had put me on another flight at midnight.  After great patience and some resiliency traveling through the night, I arrived at Carnegie Mellon Institute only a few hours late for my first session.


Little did I know that my experience at the airport was foreshadowing for what I was to encounter in my workshop.  Because I entered the session late, teachers were already working on programing their robot for their first of many challenges.   The workshop was very hands-on and it allowed us to use the robots to complete increasingly complex tasks.  But, upon reflecting on what I was doing it became clear to me that  what I was really learning when working on my own and with teams was how to problem solve.  Coding and programing robots to complete complex functions consists of trial and error, fortitude and patience.  Learning the code and building the robots was stress-free when working with colleagues.   Getting the robot to actually execute each of the challenges was sometimes frustrating and time-consuming.   This is exactly what happens to my students in design class.  As you can see from this short video, nothing ever works the first time, when programming.
Although my job is to teach them coding my bigger job is to teach them ATL skills like resilience and perseverance. 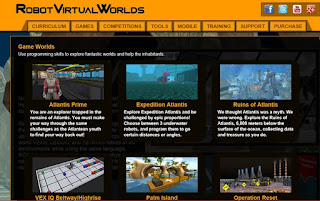 One tool to help students with learning by failure is Robot Virtual Worlds.  This online platform enables students to work through various programming challenges in a simulation type environment.  Some students a willing to take more risks if someone is not watching them.  Robot Virtual world has a variety of different games and challenges which increase in complexity and scope.  Student receive feedback as they move through various levels and stages of the challenge.  My favorite is Beltway High-rise whereby competitors have to travel around the game board the stack blocks to building a high-rise tower using various motors and sensors.


Although I had intentions of heading to Pittsburgh to learn all I could about Robotics, after spending some time touring around, I also quickly realized that I learnt far more than what I had first imagined.  For example, I learnt that in some places in the world, CHURCHES CAN INCLUDE BEER. 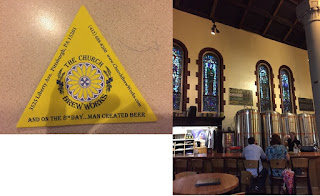 This is a picture of the famous Church Brew Pub.  I was an old Catholic church that was converted to a brewery.   I don’t know about you but I personally would attend mass more often if this was a staple at my local church.


Like church and beer, it also became clear to me that robotics education is more than learning to program and code.  There are a host of other disciplines that are needed for students to excel at solving problems using robots.  Firstly, when learning to write code, students need to ensure they use something called pseudocode which helps them organize their ideas, commands and functions.  If a there is a problem associated with your programming, finding it can be difficult, unless you are using pseudocode.  Secondly, students need a strong understanding of math principles.   For example, in order to program the robot to travel a specific distance, students can calculate the circumference of the tires and use ratios to solve for any distance. 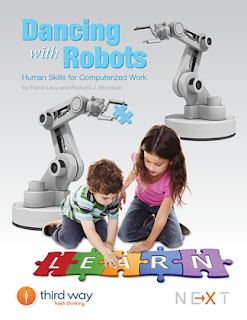 In conclusion, I went to Carnegie Mellon to learn more about robots, but came home realizing I learnt so much more.  Robots, like any other technology is another tool that we use to teach 21st century skills like communication and problem solving.  That said, technology is here to stay in our world, it affects everyone and every industry whether it be movies, phones, medicine, or politics.  Frank Levy and Richard Murnane, in their book titled “Dancing with Robots”, make the argument that all schools should be teaching programming as a tool to solve problems as our future will depend on it.

Posted by Craig Frehlich at 6:17 AM