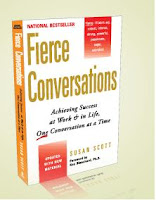 We have often heard the saying, "Let's agree to disagree".  What does this mean?  To me it means we may not have the same belief system or philosophy, but we respect each other's opinion or approach.  Discussions whereby arguments take place and debates ensue are healthy and can often act as a learning experience.  In Susan Scott's best selling book, Fierce Conversations, she advocates the importance of having open and honest conversations with people.  Such relationships should be cultivated in workplaces.  People shouldn't feel threatened by arguments and debates; they need to treat them as learning opportunities.

We can learn a lot from our enemies or people who don't uphold our same viewpoint or approach to doing things.  Walkers can teach runners to pace themselves.  Junk food eaters can teach healthy eaters to indulge once in awhile.  Lex Luthor can teach Superman that he can't do all by himself.  But, being open to this approach can be messy.  It is often human nature to get emotional when debating and arguing.  Most people want to minimize conflict and thus steer away from opportunities related to cognitive dissonance.


Just this week, while on the social networking site, Twitter, I was following a person who was constantly making negative comments about the course management system Moodle.  I got frustrated with him saying bad things about a system I think is fantastic.  In the end, I decided to not follow his tweets anymore.  Was that the right move?  When a person has affection for something, they can often develop a biased toward the object or way of doing something.  In hindsight, I can learn a lot from someone that doesn't hold the same views I do about Moodle.  The saying, "You should keep your friends close, and your enemies even closer", speaks volumes about the importance of being open-minded and willing to listen to other people's views.

In fact, I am going to activity seek out people on Twitter that uphold differing opinions and points of veiw.  Twitter often gives you suggestions of people to following based on similarities.  I think they should have another category for people to follow based on differences of opinion!
Posted by Craig Frehlich at 11:02 AM